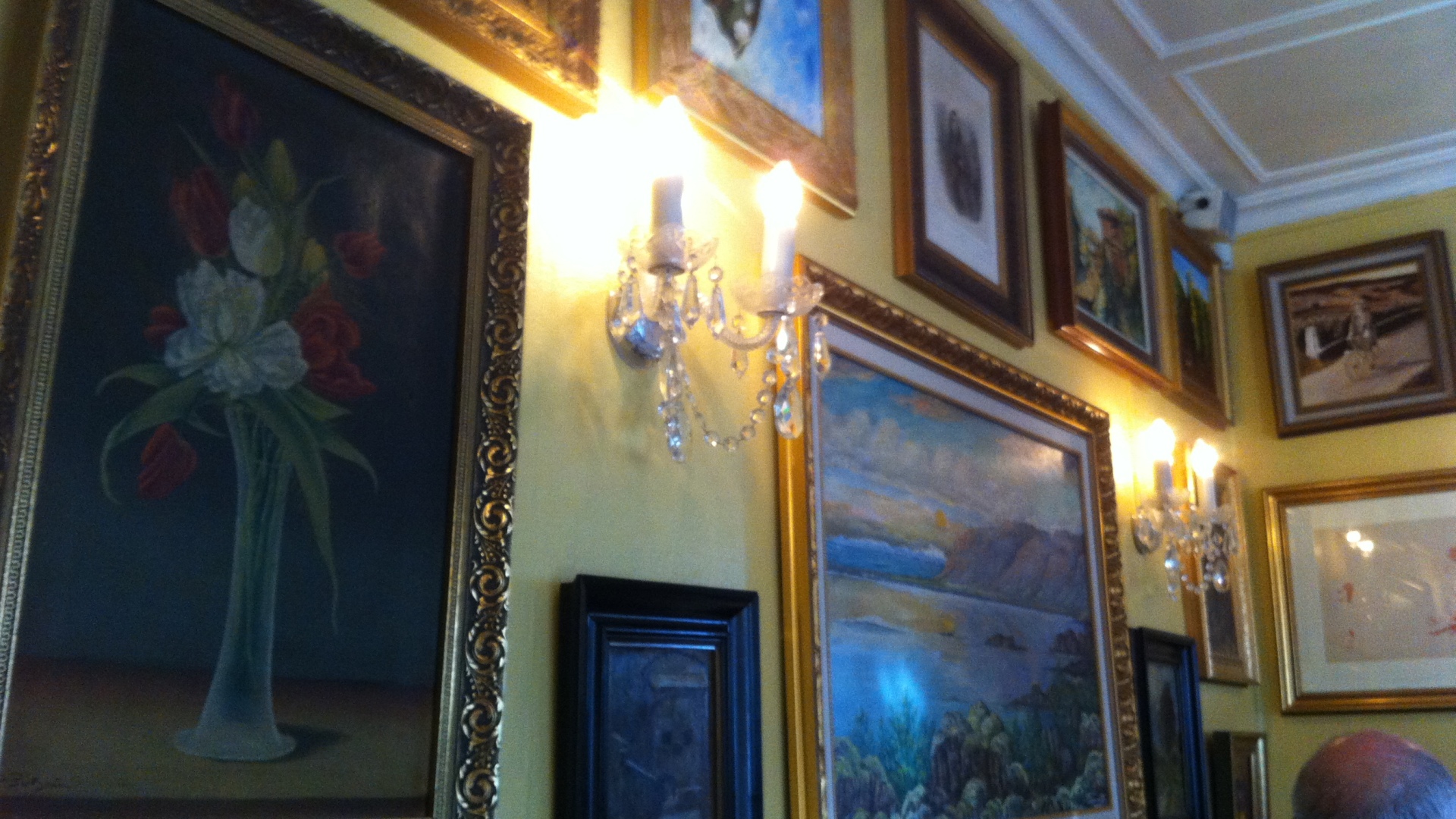 Iceland is known for its seafood and some unusual dishes. I was certainly not about to try the Hakarl. Fermented shark? No, thanks. However, I did try some other foods I had never tasted before. When in Rome…

Here are some of the restaurants I ate at while I was in Iceland, including the #1 & #3 reviewed restaurants on TripAdvisor.

TripAdvisor rank was #21 when I was there, but has since moved to #19
Amtmannsstíg 1  |  101 Reykjavík
Website

Ambiance: As you can see in the photo, the vibe at this restaurant is a bit old fashioned. There are white tablecloths and a tiny vase with a single rose on each table. When I asked for a table for 1, the waitress was quite nice, but she went and retrieved another gentleman who I felt looked me up and down before seating me. Many of the people there were middle aged and up.

Amuse-bouche: The waiter was quick to bring me this little bite of salmon and catfish from the chef, a nice welcome to a meal.

Rolls: I was given these small rolls and some butter, but I found them to be quite hard. The flavor was also not particularly pleasing.

Lobster Soup: It was super windy in Reykjavik, so I wanted to have soup. Although it is a starter, I ordered it as a main as it was a big bowl. There was a summer menu posted outside, which had peaked my interest, but the waiter informed me after I sat down that they didn’t have this menu any more. Disappointed, I settled for the soup.

The menu says the soup has lobster tails in it, but I think there was just one langoustine in it. I wasn’t crazy about the flavor of this soup. I don’t have a refined enough palate to know exactly which seasoning was throwing it off for me, but I wasn’t particularly impressed with this restaurant. 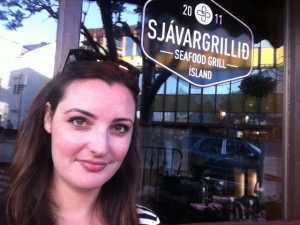 I tried eating at this restaurant the first night I was in Reykjavik, but it was too packed and there was an hour wait. The next night I returned and it was still crowded. However, it was a warm evening, so when I asked if I could sit outside, I was seated right away. You should probably make a reservation if you plan to eat here.

Ambience: Above you will see what my outside table looked like. The host was serving me instead of a waitress. He forgot to bring me a glass for the water, but was generally a nice guy and served me fairly quickly. The wooden table was uneven and wobbly. There was one small heating lamp beneath the awning above me. 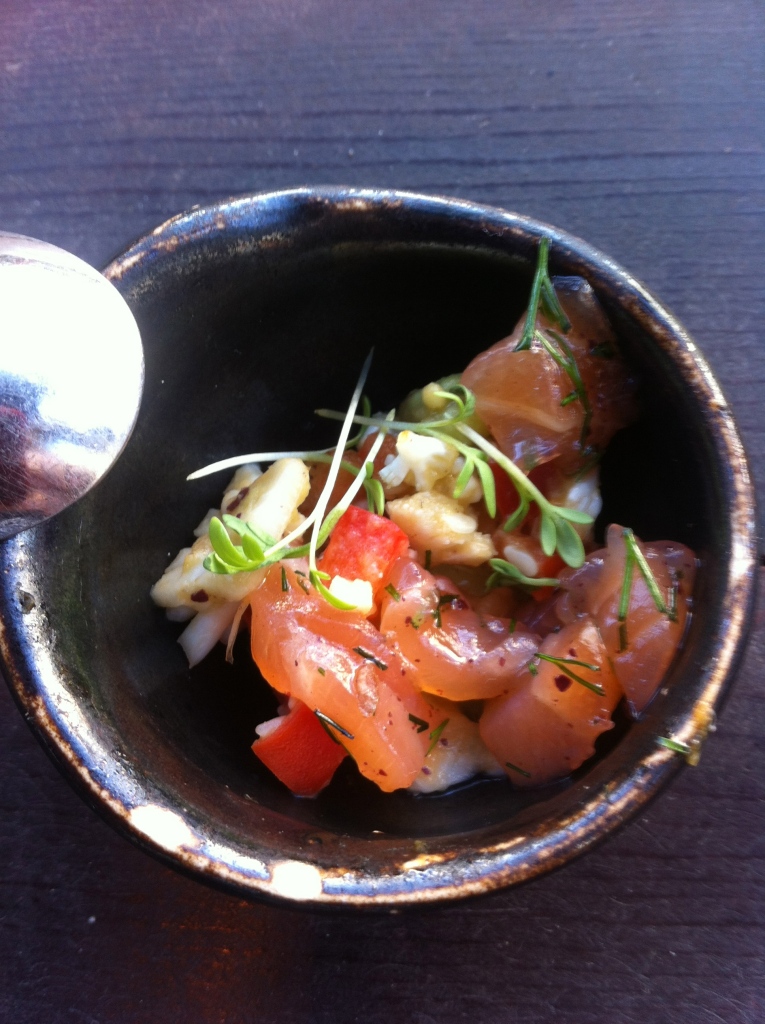 Like The Lobster House, I received an amuse-bouche of salmon. I had to pick the peppers out since I don’t eat them, but it was otherwise good. I ordered two appetizers as my meal. The first-

Hallgrím’s shellfish soup: I was disappointed with the fact that this shellfish soup only had 2 mussels and one little langoustine in it. The flavor really reminded me of the lobster soup from the night before, so I wasn’t crazy about it. The menu says it has fennel in it. If you order a seafood soup here in Norway, you generally get way more seafood in it.

Before I went to Iceland, I was debating whether or not I would eat the above, but I reminded myself, “When in Rome…” This is the Smoked European Shag, Puffin & marinated Minke whale appetizer. There is a scoop of blueberry sorbet there in the middle. From left to right in the photo: whale, shag, puffin.

The whale activated my gag reflex. Even when I drowned it in sorbet, I had to force myself to swallow it.
The European Shag is a seabird, which has dark meat. No, it did not taste like chicken. The name will of course be amusing to Brits (“Did you have a good shag?” etc.), but it actually was pretty good.
The puffin was also a dark meat, which was perfectly edible. That’s the best I can really say about that. If you can’t remember what a puffin is, they’re the adorable seabirds that look like this:

As you can see, Iceland isn’t exactly cheap, and even though it’s the #3 restaurant on TripAdvisor, it ultimately didn’t feel like it should be a $50 meal. It was nice to taste something different, but I am not sure it’s worth the price.

The Grill Market is the #1 ranked restaurant in Reykjavik according to TripAdvisor reviews. Tucked away on its own little street, it can be difficult to find, but you would never notice by how crowded it is. I tried to go here the night I ended up at the Seafood Grill, but they didn’t have room for me anywhere. My last night in Reykjavik, I made sure to get here a bit earlier and I was able to get a seat at the bar, which is preferable when you are dining alone. Definitely make reservations to come here with a group. 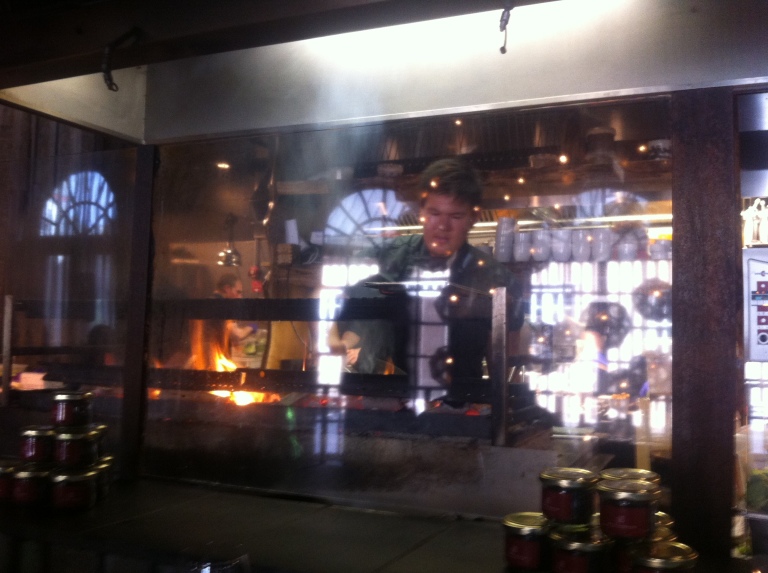 Ambience: When you sit at the bar, you are directly in front of where they make the food. It can be a little warm, but it’s nice to be able to see what they’re making.

Because I was sitting at this counter, I was able to chat with an American guy nearby who was also traveling solo. This is why it’s always better if you can find a restaurant with this sort of seating when you are alone.

The bread they give you comes with this little pile of black volcanic salt. I didn’t really like the salt, but the bread was good.

The Rib-Eye: This was hands down the best meal I had in Reykjavik. I was sick of shitty seafood soup and went straight for the meat, which comes from local farmers. The steak was juicy and cooked well (I ordered it medium). It came with a clove of garlic, which they recommended rubbing on it. The mushroom sauce (the brown one there in the middle) was so good I had to ask for more.

I subbed the curly fries for the crispy potatoes, which was an awesome move. The garlic sauce the potatoes came in was great. The veggies were mushrooms and baby corn, which were also good. Yum, yum, yum!

Even though the tasting menu is only supposed to be for 2 or more people, the American guy next to me had convinced them to let him try it. By the time his dessert sampler came, he was so full he didn’t want it and let me taste what I wanted. I didn’t take a photo, since it wasn’t my food, but the chocolate mousse that came with it was really good.

I knew the meal was going to be expensive, but I was on vacation, so I wanted to splurge on myself. I never spend this much on meals, but at least I can say it was worth it!

One Reply to “Reykjavik Restaurants”

I brought Alice to the Women’s March in Norway yesterday . 💪🏻💖 ⠀⠀⠀⠀⠀⠀⠀⠀⠀ I’d say it was her first, but technically she was forming inside me at the big one I took my students to in DC last year. 😉 That one was super fun! ⠀⠀⠀⠀⠀⠀⠀⠀⠀ The one in Oslo is quite small, but I’m always going to try to make the future better for my daughter. And I really hope she doesn’t have to go through what I have had to because I’m a woman. ⠀⠀⠀⠀⠀⠀⠀⠀⠀ Although Norway is better for women than most countries, we still have a long way to go. I think that’s why some women here can get complacent and don’t think they need to be vigilant. ⠀⠀⠀⠀⠀⠀⠀⠀⠀ But if you’re not careful, the next thing you know you’re living in the Handmaid’s Tale. 😬 ⠀⠀⠀⠀⠀⠀⠀⠀⠀ ⠀⠀⠀⠀⠀⠀⠀⠀⠀ ——————————————————————— ⠀⠀⠀⠀⠀⠀⠀⠀⠀ #baby #babiesofinstagram #babygirl #instababy #babyofinsta #newmom #cutebaby #cutestbabies #babiesoninstagram #happybabygirl #mammalivet #småbarn #vimedbarn #womensmarch #womensrightsarehumanrights #motherdaughtergoals
Reminiscing about Milan. 💜 ⠀⠀⠀⠀⠀⠀⠀⠀⠀ My friend Marije was recently there, so it brought me back to the honeymoon. We had such a good time in Milan and the rest of Northern Italy. ❤️ Italy ❤️ ⠀⠀⠀⠀⠀⠀⠀⠀⠀ ⠀⠀⠀⠀⠀⠀⠀⠀⠀ —————————————————————— #milanocityitalia #thisismilano #ig_milan #loves_milano #volgomilano #milanomia #visitmilano #mymilano #italytrip #travelitaly #italiabella #italy_vacations #topitalyphoto #italyinsider #italy_ig #volgoitalia #magicaitalia #italiait
Oh my beloved Australia. Just look how pristine the sand is on Fraser Island. 🇦🇺❤️ ⠀⠀⠀⠀⠀⠀⠀⠀⠀ Your gorgeous beaches shouldn’t be filled with people fleeing fire, desperate to escape. 😩 ⠀⠀⠀⠀⠀⠀⠀⠀⠀ And I’m so sad about all the wildlife dying! And even the koalas 🐨 who survive face starvation because of food and habitat loss. 😢 ⠀⠀⠀⠀⠀⠀⠀⠀⠀ We want to retire in Australia, but now I’m wondering if it isn’t just best to stay in Norway. With climate change going the way it is, and garbage selfish governments not wanting to do anything about it, we won’t have to worry about the winters here in 40 years. 😬 ⠀⠀⠀⠀⠀⠀⠀⠀⠀ ————————————————————————— ⠀⠀⠀⠀⠀⠀⠀⠀⠀ #seeaustralia #australia_shots #thisisqueensland #discoverqueensland #queenslandweekender #visitqueensland #helloqueensland #australiagram #ourqld #justqueensland #fraserisland #visitfrasercoast
Normally, the weather in Florida around Christmas is pretty great. Usually when I go home it’s sunny, not humid, and a nice temperature....NOT this trip. 😩😩 ⠀⠀⠀⠀⠀⠀⠀⠀⠀ This was one of the only really nice days we had. Luckily, we spent it by the sea in Key Largo and saw dolphins!! 🐬 ⠀⠀⠀⠀⠀⠀⠀⠀⠀ (After this I got my hair cut and colored, thank god 😂) ⠀⠀⠀⠀⠀⠀⠀⠀⠀ —————————————————————— ⠀⠀⠀⠀⠀⠀⠀⠀⠀ #lovefl #roamflorida #pureflorida #floridalife #staysaltyflorida #visitflorida #floridakeys #keylargo
This is a mall by where I grew up. I suppose this is very Florida! 🌴 ⠀⠀⠀⠀⠀⠀⠀⠀⠀ I used to hang out here sometimes when I was a teenager. And I don’t think I ever appreciated it before, but realized it’s quite pretty and that we don’t have anything like this in Norway. ⠀⠀⠀⠀⠀⠀⠀⠀⠀ In 2020 I’d like to appreciate more of the small things I never noticed before. ⠀⠀⠀⠀⠀⠀⠀⠀⠀ ——————————————————————— ⠀⠀⠀⠀⠀⠀⠀⠀⠀ #lovefl #roamflorida #pureflorida #floridalife #staysaltyflorida #visitflorida #thefalls #visitmiami #miamiflorida #thefallsmiami
Me looking ahead at 2020. What’s your resolution for the new year? ⠀⠀⠀⠀⠀⠀⠀⠀⠀ Not to be lame and pick a standard, but I need to lose this extra baby weight and get back to feeling how I did in this picture. I’m 20kg heavier than I was this time last year and it doesn’t make me feel good mentally or physically. So the goal is to hopefully lose it by the end of June when we head to Japan! ⠀⠀⠀⠀⠀⠀⠀⠀⠀ 💪🏻 My neighborhood gym has some babysitting hours, so tomorrow I’m signing up! ⠀⠀⠀⠀⠀⠀⠀⠀⠀ —————————————————————————— #italytrip #travelitaly #italiabella #italy_vacations #topitalyphoto #italyinsider #italy_ig #volgoitalia #magicaitalia #italiait #girlsmeetglobe #citizenfemme #sheisnotlost #womenwhoexplore #girlsborntotravel #shetravels #femaletravelbloggers #globelletravels #girlsthatwander #travelgirls #vineyard
%d bloggers like this: